Streptomyces are relatively slow growing Gram-positive bacteria that have a complex life cycle. Typically they grow as branching mycelia, but when nutrients become scarce the mycelium is first converted to a special structure called aerial hyphae. Further development leads to formation of a spore coat, which can withstand even the harshest of conditions in the soil. For these reasons and due to the existence of a strong cell wall even during mycelium growth, cloning genes into Streptomyces differs significantly from standard laboratory practices used for Escherichia coli. The two commonly used methods are protoplast transformation, where the cell wall is removed with lysozyme and DNA is introduced in a PEG-induced transformation process, and conjugation, where helper plasmids are used to transfer DNA directly from E. coli to Streptomyces spores.

In order to study a biosynthetic gene cluster, it is useful to clone the DNA fragment from the Streptomyces genome into a plasmid that can replicate in E. coli. This greatly facilitates manipulation of the pathway, but is far from trivial due to the large sizes (up to 150 kb DNA) of the gene clusters. The gene clusters may be cloned via a bacteriophage gene library or directly from chromosomal DNA using RecET recombination. The large size also prevents the use of traditional restriction enzyme based modification of the gene cluster, but gene insertions and deletions can be made using recombineering, which takes advantage of yeast homologous recombination, once the pathway has been cloned in E. coli. Alternatively, gene knock-outs can be constructed directly in Streptomyces using CRISPR-Cas, which is rather challenging to do, but circumvents the need to clone the gene cluster to a heterologous host. 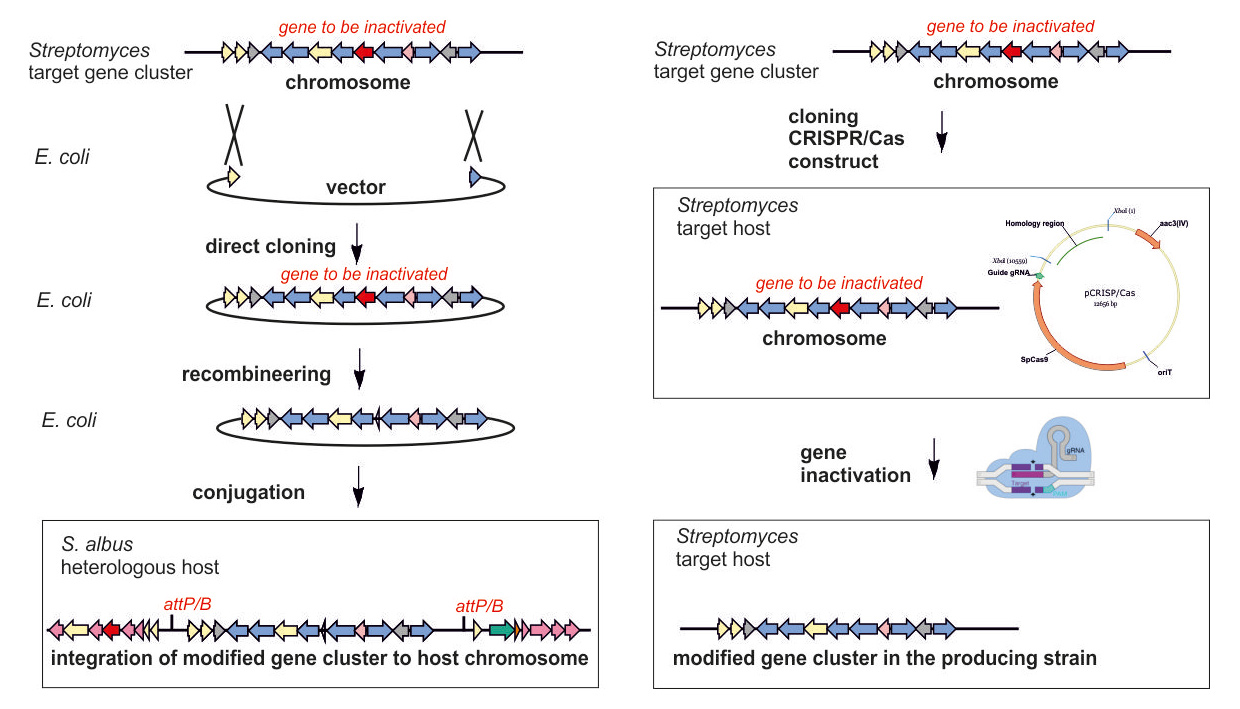 Although the molecular genetic toolbox for Streptomyces is limiting in comparison to E. coli, we have available a selection of promoter and terminator sequences as well as several plasmid vectors. Some of the plasmids integrate into the genome, whereas others exists in high copy numbers inside Streptomyces cells. We have selected a modified BioBricks method for construction of a library of biological parts, where we collect all of the biosynthetic genes that we have characterized. This methodology allows efficient cloning of any combination of genes for metabolic engineering ­studies.